From the RFK stadium to Griffith Stadium, get an inside look at some of the city's sports history

In celebration of anything and everything football-related, Curbed DC has set out to compile the history and photographs of five football stadiums in D.C. proper. These stadiums range from the long lost Griffith Stadium to the soon-to-be-razed RFK Stadium. Below, you will be able to learn about why Cooper Field changed its name and why Howard University rarely hosted football games at their stadium until around the 1970s. 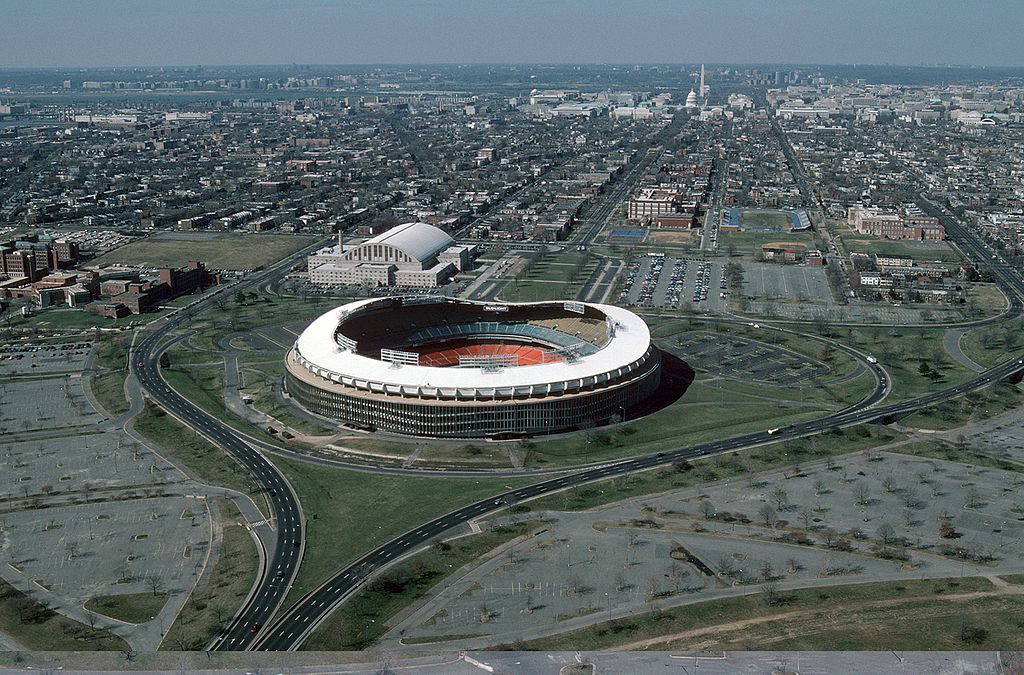 Originally, this stadium was known as D.C. Stadium, but it was renamed in 1969. From 1961 to 1996, the stadium hosted the Washington football team's games as well as the last game for the Washington Senators. Currently, it serves as the home of the D.C. United, but the soccer team will eventually move to a planned stadium in Buzzard Point. When it opened in 1961, it was the first major stadium designed specifically as a multi-sport facility for both football and baseball. Some of the famous faces that have been seen in the RFK stadium include U.S. Presidents John F. Kennedy and George W. Bush as well as bands like the Foo Fighters, LL Cool J, The Grateful Dead, and The Rolling Stones. The RFK Stadium will eventually be razed for a new stadium

On the south side of the Georgetown University campus, this multi-purpose stadium has been used for a variety of sports, including lacrosse, soccer, football, and more. With enough a capacity for 2,500 attendees, it has the smallest capacity of any team's field in the Football Bowl and Championship Subdivisions, according to the New York Times. The name of Cooper Field was originally Habin Field (1994 - 2005) and then Multi-Sport Field (2005 - 2015). The current title honors philanthropists Peter and Susan Cooper.

Once upon a time, Griffith Stadium hosted numerous games, including World Series Games and All-Star Games. Until its demolition, it was home to the Washington football team for a total of 24 seasons. Prior to the construction of this stadium, the site was known as National Park and was a wooden baseball park. After burning down in 1911, another structure made of steel and concrete was constructed with the same name. It was at National Park stadium that the first ever ceremonial presidential pitch was thrown in 1911. The Griffith Stadium name is a reference to Clark Griffith, the former owner of the Washington Senators. On the site, you can now find the Howard University Hospital.

William H. "Stud" Greene was a D.C.-based physician and Howard University benefactor who lived until he was 1983. After his death, the University honored his contributions to the school and the Kappa Alpha Psi Fraternity by renaming the Howard Stadium after him. Roughly 10 years earlier, the stadium was renovated and expanded from 2,000 seats to 9,000 seats. Before this, the venue was too small to host Howard football games, which were instead held at Griffith Stadium and the RFK Stadium. Other plans for the structure have included constructing a 30,000-seat domed stadium and a 20-acre mixed-use development with retail, offices, and apartments. Those plans did not come to fruition. Currently, the William H. Greene Memorial Stadium hosts both football and soccer games.