Husband and wife, Jordan and Marie Knowles, share their insight on what it's like to be parents in the District, while offering advice for others.

Jordan:I’m originally from small town Indiana, in a town of 200 people called Poneto, Indiana. Maybe the only Poneto in the country.

Marie:And I’m from Wisconsin, a suburb of Milwaukee. We are both Midwestern. We met here in D.C. through friends, and our first date was at a Nats Game.

Jordan:It was supposed to be a double date, but then it turned into just you and me, and then it just kind of went from there.

Marie:I interned on the Hill a million years ago, and I guess it was just a natural place to come after college. I knew I didn’t want to stay in Milwaukee. I wanted to venture out, and I came to D.C. i then decided I didn’t want to have anything to do anything with politics.

Jordan:I visited in the eighth grade on a field trip. I didn’t really fall in love with the city at the time. I mean, I didn’t get to experience what D.C. really was other than monuments and museums. Then, I later came out for work purposes. I was working on the Woodrow Wilson bridge project. Didn’t necessarily live in D.C. proper, but I lived in Virginia and kind of enjoyed the area a lot. I traveled for work, and when it came time for me to find a new position somewhere this was definitely on the table. Part of that had to do with the fact that I met this lovely lady, and so that was some incentive to come here also.

Jordan:We lived together for a while, and after we were married, next thing you do is buy a house. We decided DC. because it was the only thing we could afford actually in 2009, and it was either a condo, or it was the ‘burbs, or it was in the city.

So, we moved to a neighborhood that hadn’t really been touched, [LeDroit Park]. [It was] old, hadn’t transitioned, and [had] a lot of 100 year old homes. Part of the reason was the lady, the previous owner of the home, she kind of bought all the houses in the area. I think she had like eight or 12 different homes in our neighborhood, and then her family decided to sell her estate, and we ended up getting one of her homes, one of the six in our block that were owned by her.

Marie:Yes, we lucked out in terms of finding this gem. I think a lot of people now aspire to move to our neighborhood because it’s so rare, and has a different kind of small town feel in a big city.

Jordan:We know every single person on the block, which is really uncommon for the city.

Marie:I think the great thing about our neighborhood too is that some of the homes hadn’t been renovated or touched, so we had our own opportunity to put out own little touch on our house. And it was fun renovating and finding things in the walls.

Jordan:When we first moved to LeDroit Park, there were a lot of vacant properties. We didn’t see many people in the street too often. It was kind of scarce, like not too many people around. It didn’t take long, and now there are people everywhere.

Marie:When I came here, I was just out of college and I interned on the Hill and kind of was thinking that I might do something with that, but when I interned I did some work for Director of Communications for a senator that I worked for … and then I ended up finding a job in a tech PR firm and sort of decided to go that route instead.


At first, I thought, "Why am I in this city when I’m not taking advantage of the business here?" And then I started to grow a distaste for politics and the stereotypical D.C. thing. A lot of people get wrapped up in it, and I feel very fortunate to have stayed away from it and been able to enjoy the city for what it is and not have to get so tied up into the political world … It’s nice to be a bit of an onlooker and on the side lines and staying away from that.


Jordan:So many people in this city are government-involved, and when they ask, we say we are not and they say cool because then they don’t have to talk about it and we don’t either. So it’s kind of little pleasant vacation for us and for whoever talks to us.


Everybody in D.C., the first thing they ask is, "What do you do?" So, as soon as they find out we are not in politics, the what do you do conversation just kind of goes away.


Jordan:They don’t have to choose a political side or anything like that.

Marie:I feel like I’m discovering D.C. all over again because we’ve explored it to the full extent as a married couple. We didn’t have a baby for five years. We were on the "five year plan." We decided to wait until we had a baby just to enjoy each other and life in general, and so we explored everything together ... and now it’s like I’m exploring it again though completely different eyes with our child. It’s just interesting now finding different groups of friends, and finding places to go with our baby toexplore. I’m kind of like seeing it through a child’s eyes.


Storytimes are a number one [place to go, and clearly had no idea they existed before our baby. All the D.C. public libraries have storytimes scattered throughout the week, and all over the city. So, you can go to pretty much go to any library in D.C. for storytime, and meet other moms and dads. Plus, our baby gets to interact with other babies and see the big kids and toddlers play. So that’s really great.


Jordan:The [challenges of living in the city with a child are] coming. The major one is schools. The lottery for getting your child into a school other than just public schools [is a challenge] because there is such a growing population of parents in the city now. So, we know that’s gonna be a challenge, finding and getting into the right charter school.


Marie:… By the time your child turns three, you have the opportunity to send them to school that have different educational disciplines like language learning. So, that’s interesting. I think it’s actually a really great tool for moms and dads. I think just to be able to know that they have option, and they have education at their fingertips. It sounds like based on what I’ve been reading and learning that the charter schools have come a long way here. You start applying at two years old, which is kind of scary.


Once you have two children, it’s tight and everything is a challenge from there.


Marie:I think in terms of just having a baby in D.C. is amazing. Everything’s within walking distance. I feel like that’s another thing that I’ve just explored. It used to seem like it was so far for me to walk from home to Chinatown, and it’s really not that far. You can pretty much get anywhere within the city on foot or the Metro.


Jordan:We have a different situation with some people though. Like we had some friends that had two children that lived in our neighborhood, but were in a condo and had to move, because they ran out of space. But we got really lucky with having a house with some space to grow. I think for other parents that’s going to be a challenge because there are not too many homeowners. There are a lot of people who live in condos or they may just have a two-bedroom condo. Once you have two children, it’s tight and everything is a challenge from there.


So, we are in a kind of different world compared to some other parents that are not homeowners. Our friends are still in D.C., but they had to move further from Downtown.

Marie:That’s another thing that new parents should know about. It helps to be part of a club or a club or a meetup, particularly since most of us aren’t from here and don’t have a family support system here. I’m a member of MOMS Club of Northwest D.C., which is so funny because when I started picturing myself before having a baby, I would never have thought of joining a mom’s club.


Marie:I think it also has to do with the neighborhood we live in honestly because I feel like just different neighborhoods have different vibes and different people tend to go towards what suits their life. So, we met a lot of people that are close to where we live that are parents and similar personalities.


Jordan:Groups of friends changed for us too. From like when you are just a couple and you are going out doing whatever—going to happy hours and things—that kind of changes when a baby comes along. We are also excited when we meet other parents who are just like us. We have a common interest.

There are so many things that we can take advantage of that don’t even start until she turns 3 or 4. So, hopefully she’ll have a better access to culture and the arts than we did growing up.

Jordan:We figured out [where the good restaurants are for new parents.]


Marie:We did? I feel like a lot of places are kid-friendly. You just can’t be scared of taking your child out, I think.


Jordan:And you have to be able to change the diaper without a changing table.


Good restaurants – I’d say Barcelona’s good one. Barcelona, that’s pretty cool. Chaplin’s. The Hamilton, they were really accommodating. We had a gigantic group and lots of kids with us at The Hamilton. And when we went to Commissary.


I think it just depends on the time you go. Anybody will be looking at you strangely if you show up with a child at 10 o’clock at night trying to eat dinner. Actually, we thought Red Hen was not baby-friendly since they’re dinner only, but we went there recently when they opened for the evening and found it to be a great option. If you haven’t been there, you need to go check that out

Jordan:[We don’t want to move out of the city] because we like the history, and we like this city. I work in this city, and I love the fact that I work within like two mile radius of my home. I do construction for myself now, home renovations and working on old houses. Just like what we did to ours. But I just have no desire to go ticky tacky and move to the ‘burbs. We want to stay in the city.


[On how the city will affect our child,] that one we are wondering how long that’s gonna last. How long can she handle living in the city? We met people who are born and raised here.


Marie:I think it would be fun. I envision myself taking walks with her, going to the zoo, exploring, and going to the museums. There are so many things that we can take advantage of that don’t even start until she turns 3 or 4. So, hopefully she’ll have a better access to culture and the arts than we did growing up.


Jordan:When I grew up, I had 50-acre backyard, so I could roam and play and not have to worry about being snatched up. 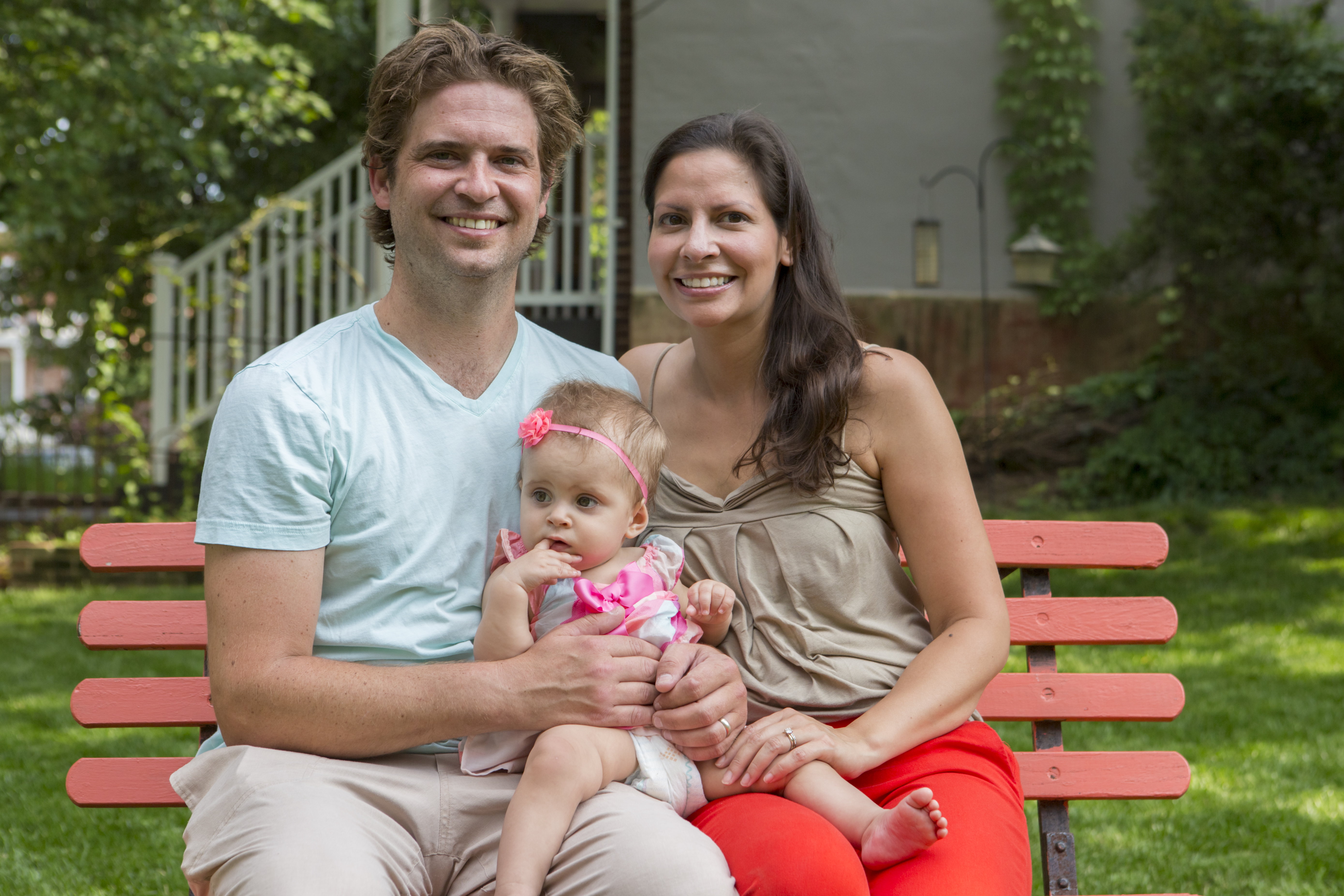