From Monstrous to Modern, See Inside a Totally Redone D.C. Townhome

This story is part of a group of stories called

Curbed's weekly original tours series takes you inside homes with eye-catching style and big personality—from modern tiny homes to pedigreed midcentury gems and everything in between.

When this Washington, D.C. townhome first landed on the market a year ago, it was a total disaster. There were no floors. The ceiling was hot pink, and the walls were an off-putting dark red. In order to make the fixer-upper livable, the current owners Daniel Fletcher and Brett Stewart had to add insulation, reinforce beams, and add fresh coats of paint. The roof needed fixing, new light fixtures needed to be installed, and more still needed to be done. Despite all of this, Fletcher and Stewart knew one thing: the home was their perfect choice.

The two toured around 50 houses before picking the townhome in Washington, D.C.’s Shaw neighborhood. It was a scary listing, and they liked that. They knew no one would want it, while only they saw the potential inside.

While they could have snatched up one of the homes on the market renovated by local developers, both Stewart and Fletcher said it seemed like those homes were redone very quickly and with cheaper materials from Home Depot.

"It was like a combination of it being fine, but not unique," said Stewart. "The quality of the materials was mediocre at best. We said we could take a fixer-upper and spend a similar amount of money and actually make it a lot more unique and have some sort of character."

Already, the two loved to daydream about how to create spaces. While neither are professional architects, they both love to design.

"It’s kind of like our passion. I’m in the design field. He’s in the real estate field," said Fletcher.

With all of the projects that needed to be done over the course of roughly half a year, from insulation to reinforcing, Stewart said, "It’s been a crash course on home construction."

"But mostly because we wanted to do it ourselves, and we were very on top of [the process]," said Fletcher.

While the idea of fixing up a home wasn’t a problem for Fletcher and Stewart, they both had to consider whether or not the Northwest neighborhood was the right fit for them. At first, the two former New Yorkers were worried that the neighborhood would be too suburban for their tastes, but they found comfort in how friendly the neighbors were and how quiet and clean the area was. Additionally, with go-to bars and restaurants like Dacha and Shaw’s Tavern only a few blocks away, it allows them to always be close to a lively nightlife.

Fletcher said, "The moment we moved in here, I fell in love with this neighborhood because everything is really close. The neighbors are amazing. It’s a really great community. It’s beautiful, I think."

Before buying the townhome, they both were living in New York, a city where they said they never knew their neighbors. Now, they’ve created relationships with neighbors in separate buildings, something completely new to them.

Being the owners of a townhome has also been a bit of a transition.

"The stress of owning a house is much different," said Stewart who said he was so nervous after the purchase that he used to wake up in the middle of the night, worried if the house was about to collapse. 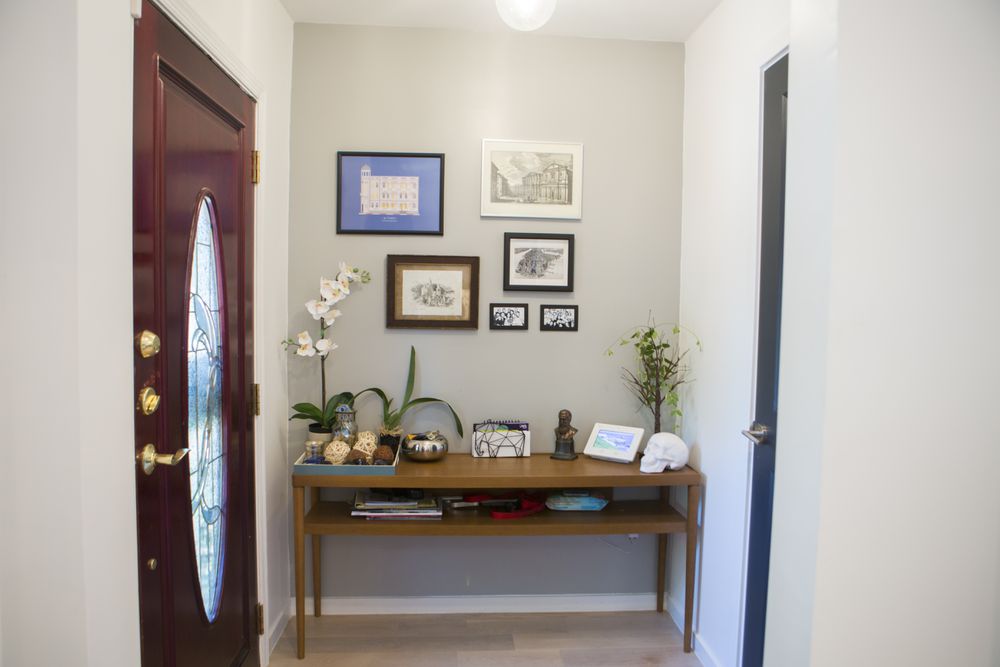 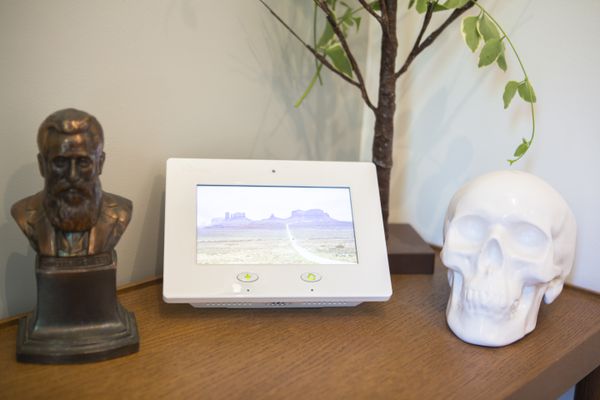 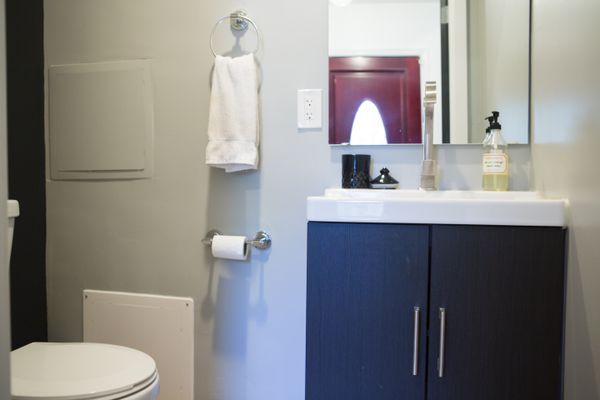 When taking Curbed on a tour of their house, Stewart said that besides the front door of the home, there’s nothing that wasn’t touched. During construction, a half bathroom was added to the main level to transform the home into a fully functioning entertainment space. A wall had to be removed to create the area with half of the new blank expanse made into a coat closet. Under the stairs, a washer and dryer was also installed, the doorway barely noticeable.

The design, which Stewart described as Mid-century mixed with Scandinavian, is complemented by a variety of artworks, ranging from Caribbean-inspired paintings to a "garden" made out of recycled materials to a series of advertisements torn out of a magazine found in a Paris market.

The favorite spot in the home is undeniably the kitchen.

Fletcher said, "We’re always ending up here, whether we have 10 guests or one."

"It all kind of gravitates here," Stewart agreed.

To complete the space, the two installed a waterfall island and stainless steel appliances from Bosch and KitchenAid. The two also bought a French buffet from the local vintage store, Good Wood.

In the guest and master bedrooms, these were designed to feel more like retreats than simply places to lay one’s head after a long day.

In the guest bedroom, there are quirky knick knacks like a Dunny doll.

In the master bedroom, some of the biggest wow factors can be found in the modern Sputnik light fixture. Stewart said that the bed’s sideboard was also found on Etsy and later repurposed.

For the doors, the two spent at least a week in search of solid core doors that didn’t take four to six weeks for delay and came with paneling.

The process to completing the bathroom was a long and tedious one. The two owners had to compromise on the tiles, the fixtures, and the concepts. While moving around the bathtub and the sink to different ends of the room, Fletcher and Stewart had to decide from three different concepts to come to a consensus.

While Stewart preferred a standing shower and was tempted to remove the bathtub altogether, he said that their neighbors prefer the feature due to many residents in Washington, D.C. being newer families.

"[It] may not be a deal breaker, but certainly one of those things that the family may say, ‘Oh, we’re going to have to redo that,’" he said.

As a compromise, the Duravit bathtub was covered with a half glass partition to give some element of the shower.

When Stewart and Fletcher found the home, they said that the fence in the backyard was rotting. It’s since been replaced, and with concrete placed and landscaping done, the area is now ready for entertaining guests, fire pit included.

Despite all of the work that has been accomplished over the many months, there are still a few smaller projects that are expected. The two plan for a backsplash in the kitchen as well as some extra landscaping in the backyard.

Regardless, with all the sunlight streaming into the home, Brett said, "There’s a good vibe and energy in the house."

House Calls is a recurring feature in which Curbed tours D.C. residents' lovely, offbeat, or otherwise awesome homes. Think your space should be featured next? Drop us a line.

A Rhode Island farmhouse that’s beachy without being ‘overly nautical’

A Back Bay brownstone that’s “highly, yet invisibly” functional

View all stories in House Calls